To share your memory on the wall of Edward Wheat, sign in using one of the following options:

There are no events scheduled. You can still show your support by sending flowers directly to the family, or planting a memorial tree in memory of Edward McKinley Wheat II.
Plant a Tree

We encourage you to share your most beloved memories of Edward here, so that the family and other loved ones can always see it. You can upload cherished photographs, or share your favorite stories, and can even comment on those shared by others.

Posted Jun 18, 2020 at 09:03pm
Ed was a great guy to be around growing up. He was a calming spirit and I know dad always seemed to light up whenever he spoke of him or was around him. He will be missed and my condolences on your loss.
Comment Share
Share via:
EB

Posted May 22, 2020 at 05:48pm
Dr. Wheat was an amazing man with a brilliant mind. He was one of two professors at USM that had a lasting impact on my life. He will be missed.

Posted May 04, 2020 at 02:11pm
Doc was the wisest person I have ever known. It was an honor to have had him as my main professor in grad school. His advice to leave Hattiesburg and go to Jackson for my internship changed my life for the better. I found my career in mental health there which allowed me to retire after 37+ years. I had heard Doc had been having some health issues and I had meant to call him but, for some reason, I did not. I will regret this for the rest of my life. I hope he realized how many students he helped over the course of his career. His Public Policy class and especially his two day lecture on "Power" changed my perspective on everything. Thank you Doc for all of the great times we had in class and also away from class. I want to believe that I was one of his favorite students...he was the best "teacher" I ever had. R.I.P. Dr. Wheat
Comment Share
Share via:
TB

Posted Apr 24, 2020 at 02:14pm
With loving memories of Edward Wheat. Ed and your family will forever be in my thoughts and prayers. 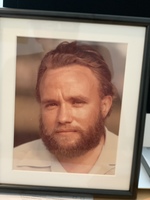