To share your memory on the wall of William Trago, sign in using one of the following options:

Bill is preceded in death by his parents and one brother, Rob... Read More
William “Bill” John Trago, 81, of Purvis, passed away February 8, 2021, at Forrest General Hospital. He was born on March 11,1939, to John and Marian Trago to Buffalo, NY.

Bill is preceded in death by his parents and one brother, Robert Trago. He is survived by his loving wife, Joan Trago; two sons, Mark Trago and Matthew (Jessica) Trago; one grandson, William Lee Trago; brother-in-law, George (Annette) Lee; close friend, Nick Risk and a host of nieces and nephews.

A memorial service will be held at a later date.
Read Less

To plant a memorial tree in honor of William Trago, please visit our Heartfelt Sympathies Store.

There are no events scheduled. You can still show your support by sending flowers directly to the family, or planting a memorial tree in memory of William Trago.
Plant a Tree

We encourage you to share your most beloved memories of William here, so that the family and other loved ones can always see it. You can upload cherished photographs, or share your favorite stories, and can even comment on those shared by others.

Plant a Tree in Memory of William
Plant a tree 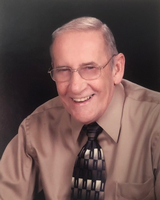